Everything you need to know about Gab (businessinsider.com) 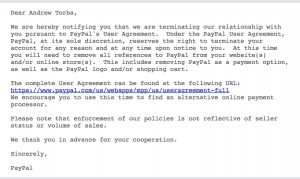 Gab.ai is a “social media” platform claiming to promote “free speech” that is popular among racists, neo-Nazis, neo-fascists, anti-Semites, and individuals advocating violence against religious and ethnic minorities, minorities.  Robert Bowers, the sole suspect in Saturday’s terrorist attack on the Tree of Life Synagogue in Pittsburgh, was a Gab user, and left his last threatening social media post on his Gab timeline.

A few hours ago, Gab’s head honcho Andrew Torba received formal notice from PayPal that it was being permanently expelled from the payment platform.