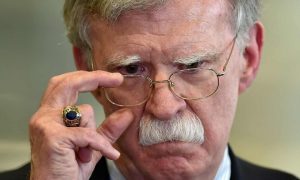 Lawyers for former national security advisor John Bolton have been in touch with officials working on House committees about possibly testifying in the impeachment probe of President Donald Trump, a person close to Bolton told NBC News on Friday.

The news comes more than a week after the White House’s former top Europe expert, Fiona Hill, reportedly testified to Congress that Bolton was so disturbed by efforts to get Ukraine to investigate Trump’s political opponents that he called it a “drug deal.”

That should take the bloom off the turd of a suspiciously-timed and now-confirmed “criminal investigation” into the origins of Robert Mueller’s investigation into Trump’s corruption:

Adam Schiff and Jerry Nadler, the Democratic chairmen of the House intelligence and judiciary committees, issued a statement last night warning that the reported criminal investigation could signal the Justice Department has become “a tool of political retribution”.

Schiff and Nadler said: “These reports, if true, raise profound new concerns that the Department of Justice under AG Barr has lost its independence and become a vehicle for President Trump’s political revenge.

“If the Department of Justice may be used as a tool of political retribution, or to help the President with a political narrative for the next election, the rule of law will suffer new and irreparable damage.”

It’s on, folks. Make no mistake: Trump will do anything to cling to power as it becomes clear that we are at the beginning of the end of his venal, fraudulent, no-mandate regime.