Rod Rosenstein leaving DOJ: What we know (so far) 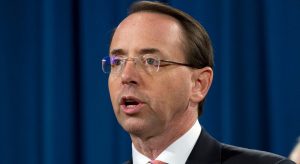 Rod J. Rosenstein, the deputy attorney general who had been overseeing the Russia investigation, is expected to leave the Justice Department after President Trump’s choice to run the department is confirmed, according to two administration officials.

Trump’s Attorney General nominee, William Barr, has yet to be confirmed — in fact, hearings have not been scheduled. There is good reason to believe that Barr is not impartial on the matter of Special Counsel Robert Mueller’s investigation into the Trump campaign and transition:

The NY Times, in a counterintuitive aside, also reports

Once it was clear that Mr. Sessions’s time at the department was running out, Mr. Rosenstein quietly supported replacing him with Mr. Barr, according to a person who has discussed the issue with Mr. Rosenstein. He and Mr. Barr previously worked together at the Justice Department during the George H.W. Bush administration.

[A DOJ] official, who asked not to be named since no announcement has been made, said there is no specific plan for Rosenstein’s departure and that he plans to leave sometime after Barr’s confirmation. … Rosenstein will stay on to ensure smooth transition with Barr, the official said, adding that he has seen his job as deputy as a two-year stint and is not being forced out.

In some ways, Rosenstein’s departure is unsurprising. Barr has told people he would like to select his own deputy attorney general — which is normal for the Justice Department’s top leaders. The deputy attorney general is like a chief operating officer, managing much of the department’s day-to-day and mediating disputes between its many sprawling parts. Attorneys general generally prefer a deputy with whom they can work well, and Barr has said publicly when he served as attorney general the last time — during the George H.W. Bush administration — he wanted to make the selection for the job.

Rosenstein’s announced departure underscores the need for the Senate to consider the Barr nomination carefully & that may have contributed to the timing of his announcement.

It also underscores that Rosenstein has faith that: (a) the Mueller probe is far enough along NOT to be dismantled (b) Barr will make a good AG and (c) he is likely a witness in obstruction regarding the Comey firing and its aftermath.

That last point is crucial. DEVELOPING…